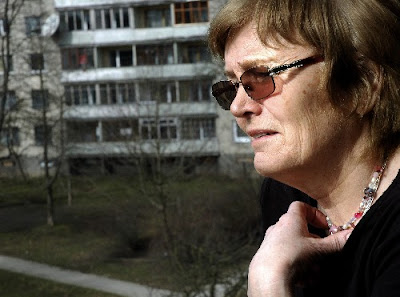 PRIVILIGED: Luise was renamed Alfreda, but still she had luck with her “new” parents who let her get an education.

Luise Quitsch-Kazukauskiene had luck in her bad luck. Today’s leader of the organisation for the Wolf Children got stolen by the right people.

VILNIUS, LITHUANIA - “Mother made me repeat the phrase ‘I am Luise Quitsch’ until I had learned it, and told me that I should say it to people I met. I found it incredible strange, because I was only ‘Luise’. But mother knew what was going to happen”, says the 67-year old women, who is the leader of the organisation for the German Wolf Children in Lithuania.

She was only five when she had to flee from the advancing Red Army. It is not much she remembers from those days; she describes it as she has a mosaic of small bits of memories. 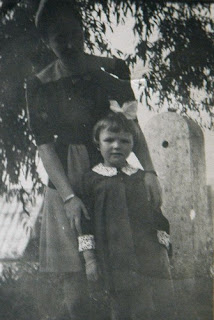 She was together with her mother and sister in Königsberg (today the city of Kaliningrad). She remembers they were at the train station, and that she had a dark blue coat.

The next thing she remembers is dead horses, suitcases and toys lying in the ditches. And that she wanted a teddy bear, but was not allowed to pick it up.

She remembers a burning forest – the trees looked beautiful, like big candles.

She remembers she starved, and that she walked and walked.

How she lost her mother and sister is just a black hole in her memory.

A freak of chance

The next thing she recalls is Russian soldiers, and that she lived in a barrack with them in a military camp.

“From this point, I can tell more, because here my adoptive family is included in the story”.

Through a freak of chance, one of the soldiers had a local girlfriend. He told her that they had such a cute little girl in their camp, and she went home and told her parents.

Since their children were all grown ups, they decided that they wanted to adopt the little girl.

“One day I stood by the fence and looked out, they came and started to talk to me. The daughter picked out some candy from her bag and lured me to go to a hole in the fence. I crawled through, and then they ‘stole’ me”, says Luise and smiles.

She really has a reason to smile today. The couple who adopted her treated her well. Her new mother was a teacher, and let Luise go to school.

Her new parents did only speak Lithuanian with her. Soon she stopped saying “I am Luise Quitsch” as she had enough to do with learning Lithuanian in first grade, and Russian in the second. Lithuania had become a part of the Soviet Union.

Thought it was a dream

During the first time in school, she was mocked by the other kids.

“They gave me cruel names and so on. They probably just said what they had heard their parents say at home, but sometimes children can be so much crueler than adults.”

But after some time, though, Luise got totally assimilated. She forgot her language by her 10th birthday. Her life before Lithuania turned into being just a vague dream. She started believing that she was reunited with her real family, and that her name was Alfreda. 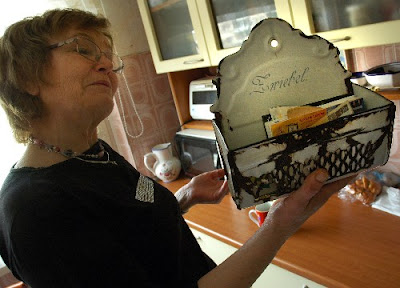 WORTH TWO VODKAS: This iron basket hung on Luise’s mother’s kitchen wall, even 50 years after they had to leave their home. The old, alcoholic Russian lady who lived in her old home now, was happy with two vodka bottles in exchange for Luise’s mother’s old belonging.

First 35 years after, when she had turned 45 and worked at a ministry in the Lithuanian capital, Vilnius, she understood that it was not a dream at all:

On her way to work, she passed by a toy store. In the window she saw a wooden toy, which she suddenly called “Hampelmann” (a jumping jack). That was a word she didn’t knew, from a language she had forgot a long time ago.

In the beginning of the 1990s, Luise re-learned German. Today she speaks it perfectly again.

On its biggest, the organisation had about 250 members in Lithuania. Today it has less than 100, and is declining steadily as the youngest Wolf Children are in their late sixties.

Luise thinks there might be more Wolf Children out there than only the members of the organisation.

“They probably do not remember their refugee past. Or they do not feel the need of searching after their original identity in their old days, when they already have lived more than 60 years with a Lithuanian one.” 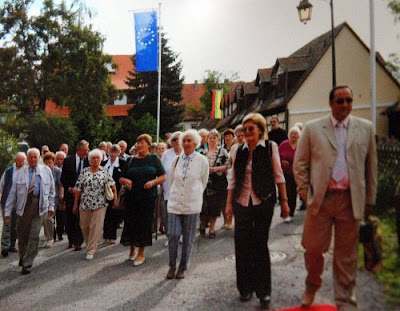 GERMANY: Last year, Luise Quitsch-Kazukauskiene accompanied some of the members of the organisation she leads to Germany. For many of the Wolf Children, that were the first time they stood on German soil since 1945.
Newer Post Older Post Home