Left Behind in Lithuania AT THE SPOT: The so-called “Wolfskinder Denkmahl”, the Wolf Children Memorial, was erected in 1992 at the cross-road between Kaliningrad, Taurage, Silute and Kaunas. Head of the Wolf Children group in Taurage, Bronius Dapkus, is also the main caretaker of the memorial.

The frost-bitten, six-year old Uwe Tritz could not walk, and became a burden for his sister. Left behind, he grew up under harsh conditions in Soviet-occupied Lithuania. Today he is Bronius Dapkus, and thankful for his life.
MIKYTAI, LITHUANIA - Bronius Dapkus is looking thoughtful at the memorial for the Wolf Children. His eyes are focused at the inscription and his mouth is tight-lipped.

“It is much nicer here in the summer. Then we plant flowers around it, and the forest behind it is green and smells so good”, says the 68-year old in a manoeuvre to get his thoughts over to something brighter than what he probably was thinking of in the first place.

A place for choice

The memorial is placed just besides a cross-road in the Lithuanian countryside. It is not a coincidence that it is located just here: In the end, and just after World War 2, thousands of children were escaping East-Prussia (today Kaliningrad) in search of food and security.

This was a place for choice for those who had crossed the border from East-Prussia to Lithuania, just five kilometres southwards:

Take the western route, and you would end up in the towns of the old German “Memelland”.

Take the eastern route, and you would end up in the big, but rather poor, cities of Kaunas or Vilnius.

Continue straight ahead, to the north, and you would first reach the custom’s town of Taurage, then the heart of Lithuania or even Latvia if you walk far enough.

Bronius Dapkus, or Uwe Tritz, which was his German name, did not have a choice.

“I can only remember fragments, since I was only six years when we escaped”, says Uwe.

What he remembers, though, is that he was together with his sister and his brother.

“We had to evacuate from our home when the invasion came. When we returned to the house, there were Russians living there. They told us ‘little Nazis’ to get away, and so we did.”

They had been separated from their mother, and had to take care of themselves. It was shortage of food in East-Prussia, but his older siblings had heard that there was plenty of bread in Lithuania.

And so they landed in Lithuania in the end of the year 1945.

“She said I was dead”

The winter was terrible. The three children lived in shelters for a month.

“In the end I were so reduced and frozen, I could not walk. My sister had to carry me”, Uwe recalls. 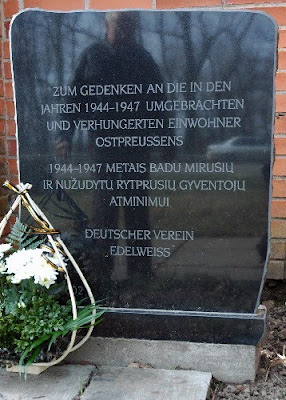 The next thing he remembers is that he was taken care of in a cabin.

“It was warm in there, and the people there gave me something strong to drink. I think it was vodka.”

By this time, he had become a too heavy burden for his brother and sister. They left him there, and promised to come back after him. But they did not.

“My brother, my sister and my parents managed to get to Germany. My sister told them I had died. It was probably easier to settle with a dead child, than to live in uncertainty with a missing one”, says Uwe, quiet.

Thanks to the German Red Cross, he managed to get in touch with his family again, but this was several decades later.

“I met mother again in Germany before she died in 1985, but she would not believe I was her son.”

In Taurage, Uwe was adopted by a farmer. He worked all day, and did his school work late in the evening. Many times he was so tired that he fell asleep by the kitchen table with the oil lamp burning.

“My adoptive father enjoyed drinking. When he came home late and found me like that, I got a proper beating.”

Uwe managed to complete his primary education, learned to speak Lithuanian well, to read and to write. That made him to get slightly better off then a lot of Wolf Children who have lived with illiteracy all their lives.

That’s also the reason why he is the head of the biggest Wolf Children group in the country, today counting some 20 members.

As the Wolf Children are dying out, or moving to Germany, it is not much of activity in the organisation anymore.

“All the ones who spoke German in Taurage have moved back to Germany. We have no one here to represent us towards the German authorities, or to help us writing letters with relatives in Germany”, says Uwe, who has also forgotten the German language.

“Practically, we are left alone. But we take care of each other as good as we can.”

Even though he suffers from rheumatism and has been heart-operated four times, he makes an effort in voluntarily helping the members of his group and maintaining the memorial over the Wolf Children in Mikytai.

“My doctor says my health problems are related to the frost injuries and strains from my childhood. But I think making good deeds is good for my heart”, smiles the 68-year old Wolf Child, who is free of grudge towards anyone, and grateful towards the Lithuanians: