Partners in an Unfortunate Fate 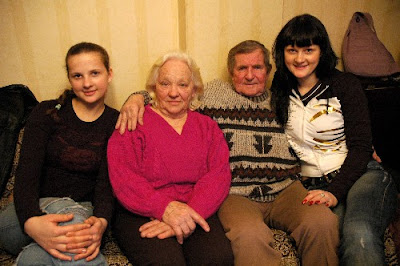 THANKFUL: Hilde Horn-Miliauskiene (71) and Heinz Willeweit-Miliauskas (74) are thankful to have survived a difficult life as Germans in Lithuania after World War II. Giedrie (16) and Ingrida Lutautaite (21) are proud of their grandparents.

Hilde Horn-Miliauskiene (71) and Heinz Willeweit-Miliauskas (74) are both German Wolf Children. They were forced to forget their mother tongue, and didn’t get any education in Lithuania. Still they are grateful to the Lithuanian people for sharing their bread with them, over 60 years ago.

TAURAGE, LITHUANIA - “It was the destiny which lead us together”, says Heinz Willeweit-Miliauskas.
Once he got invited to a wedding in his neighbourhood. There he met a girl which had experienced the same as him; the escape from Königsberg (today the city of Kaliningrad) to the promised land of Lithuania.

“We have now been married for 51 years”, he tells, while exchanging a warm look with his wife.

When the shortage of food got precarious in Königsberg, Heinz and his brother left the city to satisfy their hunger. “In Lithuania they have bread”, the brothers had heard. So Lithuania became there goal.

First, they went to the village where their grandparents lived, but they weren’t there anymore. Some Russians had moved in to the house, and chased the boys away as they knocked on the door.

For weeks they slept in stables and sheds, until they reached the border-town Tilsit, today called Sovjetsk. The bridge over the river, which makes the border between Kaliningrad and Lithuania, was blown-up. But a ferry took people from one side to the other.

The Russians wouldn’t let them enter, but they managed to hide. In the middle of the river they got caught, and the shipmen threatened to throw them overboard. But they didn’t.

“Adopted” by a farmer

On the Lithuanian side they were catched again, but the two boys managed to escape. From farm to farm they went, begging for food. Sometimes they were lucky, and got bread, eggs and some meat.

The brothers worked at several farms, until Heinz met one who would give him permanent work with taking care of his cows. But the farmer took a chance by “adopting” a “small German”. He couldn’t risk that any Soviet official heard his little helper speak German – then he and his family would get a one-way ticket to Siberia.

Therefore, Heinz and his brother were separated. They didn’t see each other for eight years.

“I weren’t allowed to speak German at all. They wanted me to forget my language. I went to school for three years in Germany, but not at all in Lithuania. Today I can’t neither read nor write. I’ve also forgot how to speak my mother tongue”, says Heinz.

His wife has suffered the same destiny.

“My mother died, my father was in the ‘Wehrmacht’, the German army, and my sister and my brother also died. Consequently, I was all alone in the world”, says Hilde.

“We hide ourselves under the benches. An old lady told us that we had entered Lithuania. We went of at the next stop and started begging for bread”, Hilde recalls.

First, she was taken as a bandit, because she could not speak any Lithuanian. Things got slightly better as she got a permanent place to live. But still; without any proper education, she, as many other Wolf Children, ended up as an illiterate, doomed to a life of hard physical work in the Soviet Union.

Proud of their grandparents

The grandchildren Giedrie (16) and Ingrida Lutautaite (21) live in the same house as their grandparents, one floor underneath. ”We are proud of our grandparents. They have worked a lot, and they have worked hard. Extremely hard. And they can’t read and write. Therefore we come and help them as often as we can”, says Giedrie.

“Just think how young they were when they had to flee. All alone in a foreign country, and they didn’t even know the language! If such things had happened to me today, I’m not sure if I would have made it”, says Ingrida, and starts doing the dishes.

The old couple has indeed had a hard life, but they do not bear a grudge against anyone. The only one, if any, is Hitler.

“He brought us into the misery. But we are forever thankful to the Lithuanian people. They did also have problems, but they shared their bread with us. In the end; that’s the reason why we can sit here and drink coffee today”, says Heinz Willeweit-Miliauskas.
Newer Post Older Post Home