Wolf Children Still Care About Each Other 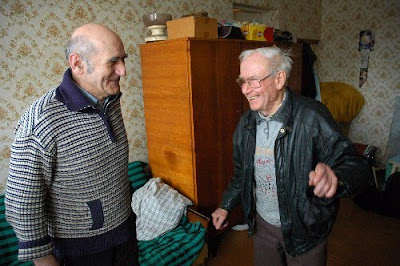 HAPPY MEETING: Bronius Dapkus (right), or Uwe Tritz in German, is glad nothing has happened to his friend Horst Potschies (left) at the border.

“We have to go down to the border and look after Horst. He doesn’t answer his phone, that’s not like him. I fear something could have happened to him”, says the leader of the Wolf Children in Taurage, Bronius Dapkus. The 67-year old is worried for his ten year older friend who lives at the border to Kaliningrad.
PANEMUNE, LITHUANIA - Just as good people took care of the German Wolf Children over 60 years ago, the old Wolf Children now take care of each other. The remaining Wolf Children in Lithuania mostly live in remote areas, many of them with bad health, aging without any proper public services for the elderly.
Bronius Dapkus drives as fast as his German Opel can bear along the straight-as-an-arrow A12, down the 30 kilometres from Taurage to Panemune. The village counts one border check-point, one bar, one sauna, a handful of houses and 324 souls. One of them is German.

“Mein Name ist Horst” – “Welcome! My name is Horst”, says the old man in perfect German language. He welcomes his visitors with a firm hand-shake outside his run-down house. No doubt that Horst Potschies (77) has once been a very strong man. But the years have haunted him, and the health is worsening.

“Oh, I’ve gone through a lot in my life”, he says, when he has given his two guests a seat in his living room.

Horst is a Wolf Child, but not eager to go into details with the earliest part of his story, when the war ended. That is still too hard. He was 14 years old when he had to flee East-Prussia.

Run through the forest

“I was all by myself, and had to flee through the forest. I feed myself with whatever I could find, or get. At one point I reached Lithuania, and worked at a farm from 1945 to 1949. The farmer had lost one arm in the war, so you can think how much work I had to do…”

In 1949, collective farms were established in his village. There he worked almost as a slave worker for one year.

“That was bad times. It was even better during the war”, he thinks.

Thanks to a sympathetic Lithuanian mayor who claimed that Horst was a Lithuanian, the strong and healthy young man got out of the collective farm and into the Red Army. 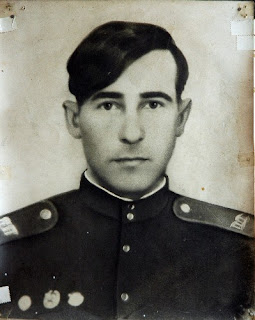 “Potschies could have been a Lithuanian name; it sounds so strange, doesn’t it? And what do the Russians know… Anyway, I was drafted for three and a half years and stationed in the mountain artillery in Chechnya. This was directly after the Russians had transferred all the Chechnyans to Siberia, poor them. But for me, the military service wasn’t bad at all. I was dressed, warm and filled up. It hadn’t been like that since I was a kid.”

Thanks to a good ear for languages, he had already learned Lithuanian, but now also Russian. His German identity had to be hidden, for every price.

“I some sort of “infiltrated” the Red Army, he-he-he. I can’t imagine what they would have done to me if they had found out that I was actually German”, he says.

Not far, but still distant

In 1960, six years after he was dismissed from the army, he disclosed his German secret to his wife. “Without any trouble, luckily.”

Since that time, he has visited his childhood home in Kaliningrad several times. It’s situated only some 30 kilometres from what has been his home in Lithuania for more than half a century.

After Lithuania entered the EU, visiting his old home town is more difficult. Though, every year he applies for a visa.

Panorama to the border

Since Horst retired from his work as driver and construction worker, he spends a lot of time at home. Beside him in his couch lays a pair of binoculars. Watching what’s happening at the always busy border checkpoint is as good entertainment as watching the telly. “I’ve picked up the spying from the old days”, says the 77-year old and laughs.

“But why didn’t you answer your phone?” asks his friend Bronius.

“Oh, the battery on my cell phone is “kaputt”. I have to buy a new one. Maybe I’ve talked too much with my old brother in Germany?”
Newer Post Home